SUSPENSION DESIGNER HAS NOW BEEN UPDATED TO RACE SOFTWARE CLICK HERE TO NAVIGATE TO THE NEW PORTAL
HTTPS://RACE.SOFTWARE/ 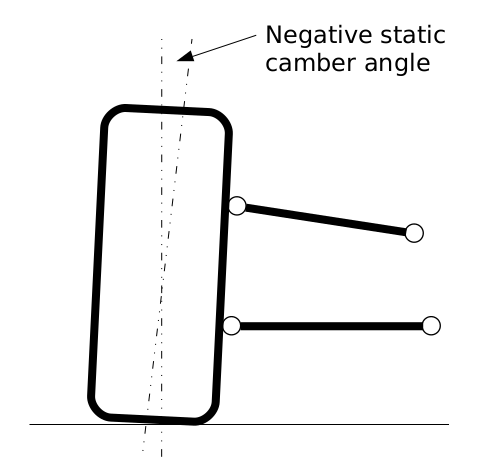 Tyre camber angle to the road surface is one of the key variables which influences tyre performance.  Static camber, bump camber, camber compliance and steering geometry all combine to give a resultant tyre camber to road under any driving scenario.

On production vehicles, tyre camber angles are typically between -0.5 Deg and -1.5 Deg.  Running higher negative camber angles will improve the cornering power of the tyres but may result in premature inside edge wear.  On a vehicle used for track driving, this inside edge wear due to higher static camber may be balanced by the higher outside edge wear during hard cornering when the tyre looses camber to road due to body roll and camber compliance.  Static camber differences between the front and rear suspensions can also be used to make small changes to the handling balance of a vehicle.